The 64th edition of BRAFA brought together 133 Belgian and international art galleries at the Tour & Taxis, in Brussels, from 26 January to 3 February. The event has shown once again, with its 66,000 visitors, that the public’s interest in art remains very high. It might seem superfluous to say that art knows no frontiers, but in these uncertain times, where borders seem to have become, once again, a priority for many countries, it is certainly something worth remembering and – most importantly – worth demonstrating. “Art Without Frontiers”, indeed, because Brafa has always focused on a combination of styles, periods and origins, keeping eclecticism and unique collections at the heart of its brand. This trend is particularly popular with contemporary art collectors and enthusiasts, who love to create collections where ancient, modern, and contemporary pieces live side by side. “Art Without Frontiers” also aims at putting the spotlight on art pieces from every continent and every culture, a message that has long been one of Brafa’s strengths. Coming from Africa, America, the Middle East, Asia, or even from distant Oceania, many of the pieces featured in the exhibition have opened the visitors’ eyes to new forms of art and expression, to other representations and visions of the world. “Art for All” is, on the other hand, the idea behind the choice of the Guests of Honor for Brafa 2019, the famous British duo Gilbert & George, represented in the exhibition by five large-scale photomontages, placed in different locations of the fair. Gilbert & George, internationally recognized for their art, draw their inspiration from their daily life, spent in the historic East End area of London, in close quarters with working class people from multicultural backgrounds. Their art is a reflection of their daily experiences, and the themes of their works deal with topics like sex, religion, corruption, violence, hope, fear, racial tensions, patriotism, addiction and death. The infectious humoristic side of Gilbert & George brought fun and dynamism to this event, which aimed to promote, more than ever, the idea that “art is for everyone”, as the London artists have always stated. 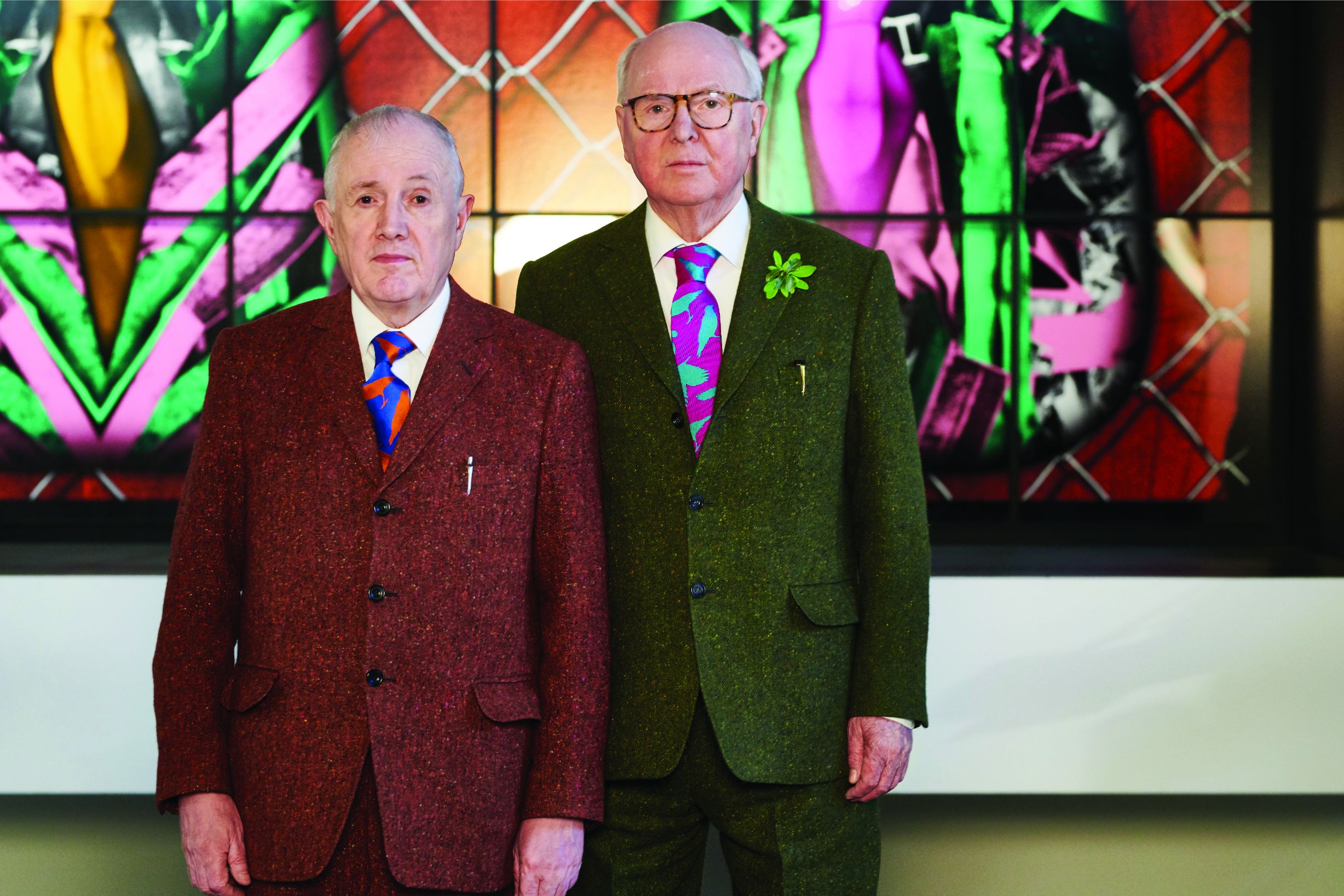 How did your artistic journey start?
When we met, in ’69, we decided to put ourselves at the center of our art. This changed everything, of course, because we are living beings, we feel joy and pain. Our constant provocations allow us, in our own way, to become art through our performances. We like to define ourselves as two “walking sculptures”, with movements so choreographed that they have become second nature.

Your work is the result of a constant observation of what is happening in the world. Your position against God has always been clear. Would you call yourselves humanists?
George: “Humanists, yes, and libertines. In reality, we have nothing against religion. God is the problem”.
Gilbert: “Individual freedom changes the world, not religion, with its words carved in stone. The artist, the creator, the poet, is free to change his mind and to look at the world each time in a different way. The artists are the ones who dictate how that happens, and even the Church is forced to change”.
George: “The church is dragged into the future, kicking and screaming”.

You are “for the individual” rather than for society.
George: “We do not want to depend on the State. We want to be autonomous and independent, we are free spirits”.
Gilbert: “We are socialists, in the sense that we want our art to be accessible to everyone. Our motto is “art for all” because we know that, for centuries, the art market has been controlled either by the rich or by the Church. We want everyone to see what we are trying to do, through large exhibitions that dominate the spectators”.

One last question: where do you find such perfectly tailored suits?
Gilbert: «Working class boys made them».
«Exactly, they are cut and sewn by poor people».
George: “If you put all the popular styles of men’s clothes in the 19th and 20th century into a computer, in order to find an absolute synthesis of all of them, these suits would probably come out”. 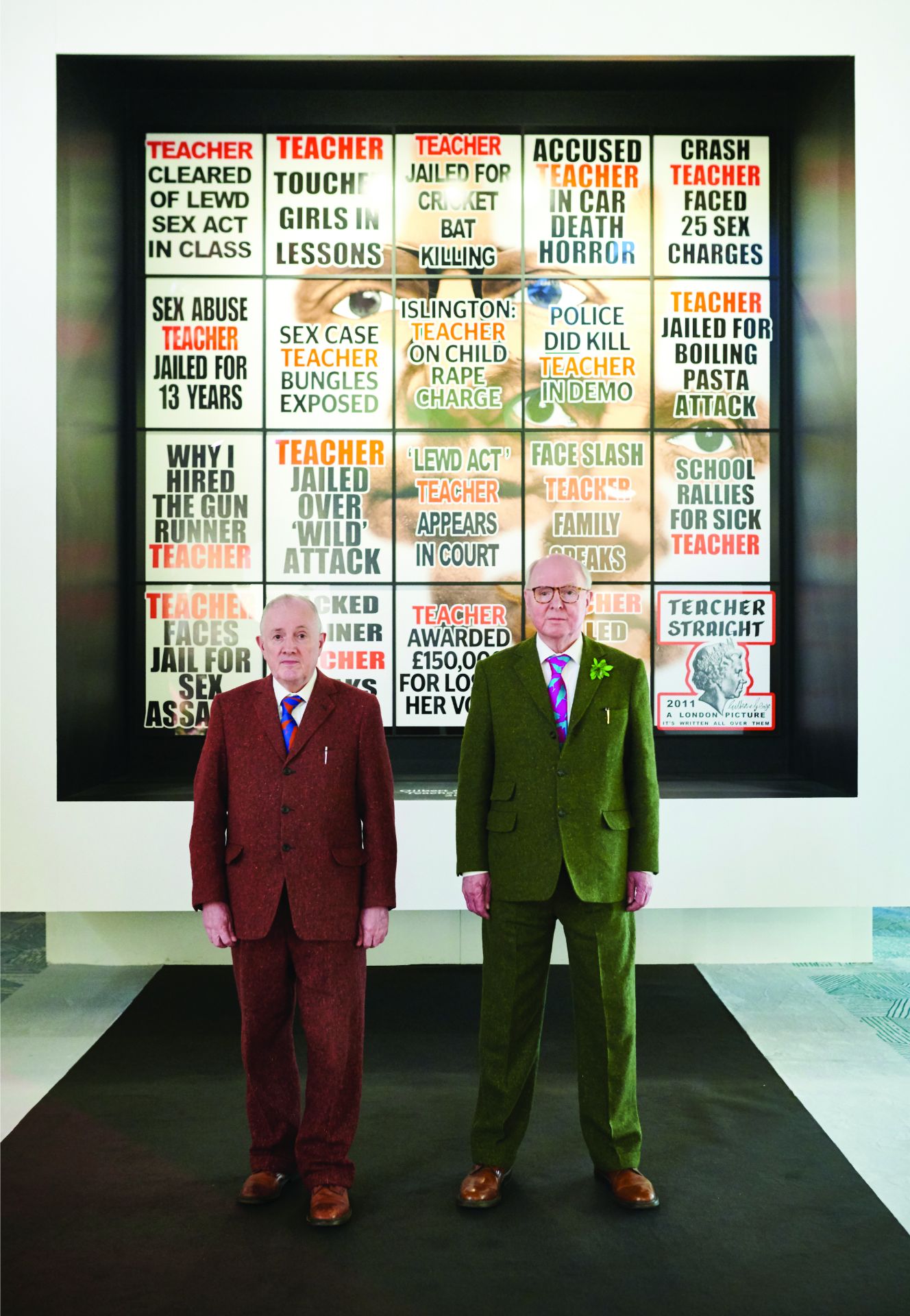