An artist born to an Oscar winner, a borderless city. Six pairs of hands, 15 meters tall and 20 meters wide, at Venice’s Arsenale. Here comes «Building Bridges», by the same sculptor as the other hands, son of Anthony Quinn.

Hands. Hands that tenderly, gently support a small blue Earth looking even more fragile (“Tree of Life”, in front of St. Martin’s Church in Birmingham, commemorating victims of WW2). Hands. Enormous hands surfacing from water in the Grand Canal, as if asking for help or coming to our aid, to the rescue of Venice’s palaces (“Support”, one of the most photographed subjects at 2017’s Biennale).

And now, once again Venice, once again hands. Six pairs of hands, 15 meters tall and 20 meters wide, a sort of mysterious portal at the Arsenale. It’s «Building Bridges», and just like the other hands in Venice, it’s a creation by sculptor Lorenzo Quinn, son of the great Anthony Quinn, half Italian and an honorary Venetian (“My mother, my wife are both from Venice: it feels a bit like home, even if I live in Barcelona”).

The artwork inauguration, with a concert by Andrea Bocelli and galas will be the set to the introduction of this colossal sculpture assembled in the past few days. Quinn has imagined it as «a symbol for everything that unites. Hands are the heart of my work because with them, we can do anything: we can do good, we can do bad. We create art. Caress our children. I feel I have a duty to leave something to them, this world our fathers lent us so that we guarded it, and possibly improved it before handing it over to our children… Hands. Without them, we cannot act. And in these times we happen to live in, we need to get down to work. Together. With our hands. To build something. Bridges, for sure. I create art that is visible to everyone, to the people, because I think art is a global heritage, with no borders.” 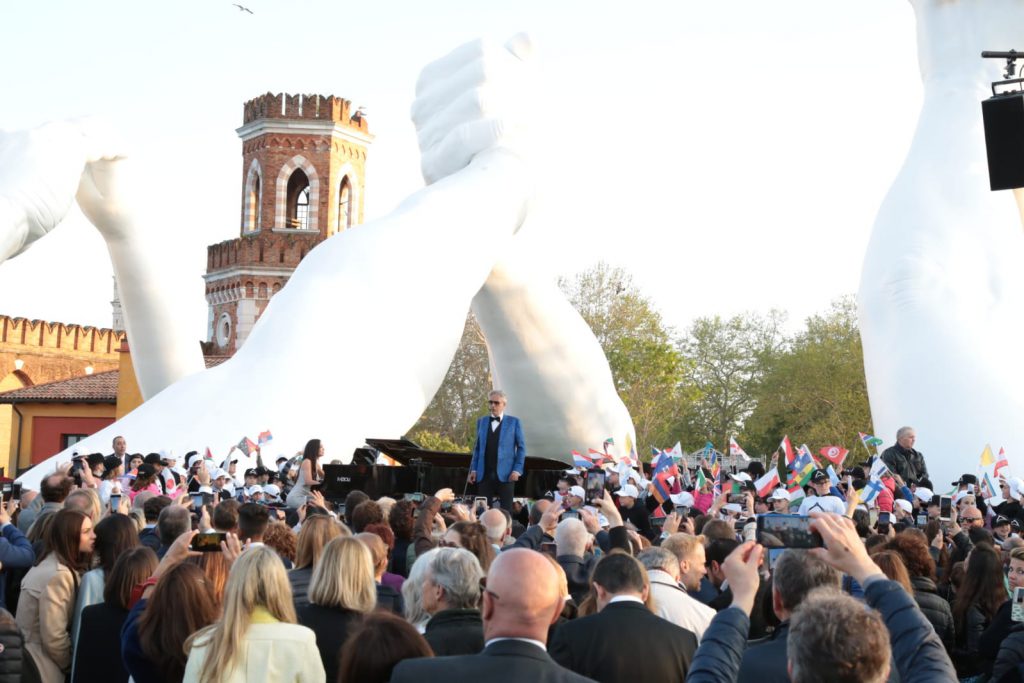 “An artist without labels”

Something Quinn learned from his father. “He set a true example of an artist without labels. He was half Native American, half Irish, and grew up in the United Stated, worked at Hollywood and in Italy and wherever cinema was made, he was the first truly international actor. Something else he taught me? The value of work, the ethics of work. He worked for all his life, started when he was just 3 years old by selling fruits in the fields. As an adult, he won an Oscar and still, he never stopped working. He approached art during the lengthy breaks on set, he used to paint, to sculpt… in his last years, that was his greatest passion. Yes, my father inspires me: not a particular movie, just my father as a person, as a human being.”

Why Venice, in 2017 and now? “It’s the city of bridges, the city without borders, a republic open to the whole world. This is perhaps why the Venetians, from ordinary citizens to the mayor, were so excited two years ago, and still are now. My work from 2017 will stay here permanently, at Viu, the International University on the island of San Servolo. It’s the city of universal culture, since long before the superb Biennale.”

Six pairs of hands symbolic of six universal values: “Friendship, wisdom, mutual help, faith, hope. And naturally, love. Because love changes the world, even more than art. And yet, world can be changed with our hands. All together. This work reminds us of this… on an extra large scale, let’s say».

Art in the time of the pandemic. The retrospective dedicated to Edward Hopper, underway in Basel, Switzerland, is a good example of how artistic fruition changes due to the measures of prevention of infection
Read more
Art & Culture

Tireless and passionate, linked to the history of Italian fashion, Bob Krieger has interpreted a particular and always recognizable idea of ​​portrait and has represented Italian Style in the world, especially in the period from the sixties to the nineties
Read more