Nausicaa Dell’Orto, 25, a name straight out of a myth and a story to match. From Milan to the States, where she works for NFL Films, she shares her story and her talent: from improvising her first training sessions at a public park to her new role as captain of the Italian women’s football national team. 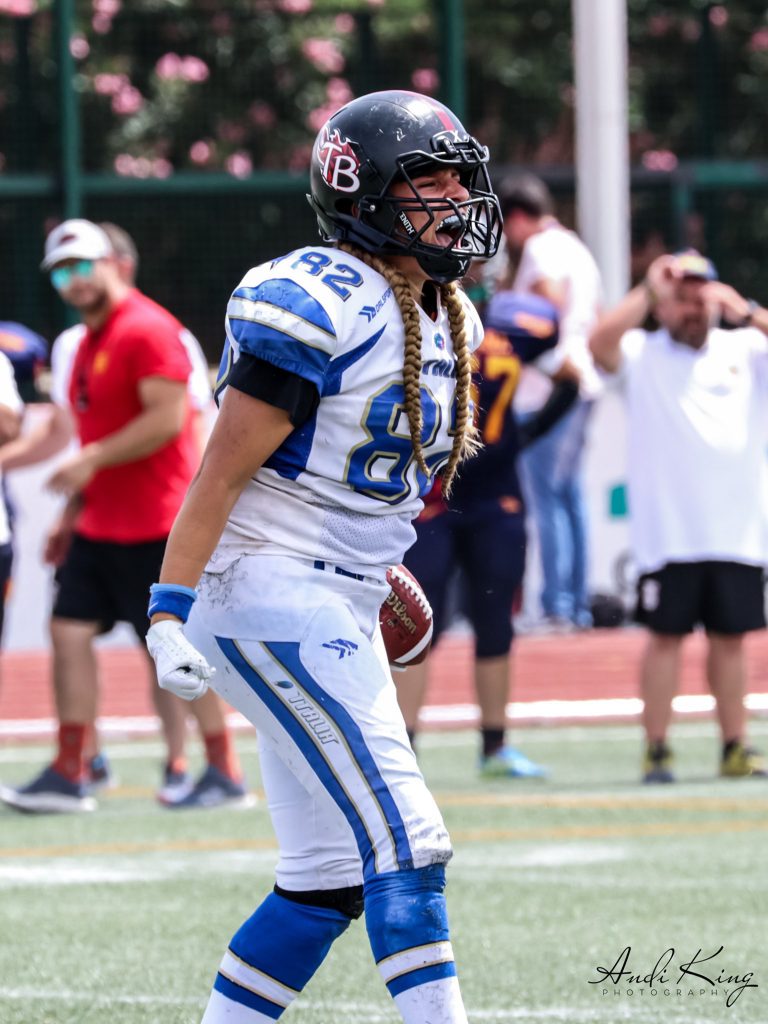 How did you discover this sport?

In 2010, I started cheerleading for the Seamen Milan men’s football team. Yes, that is right – I was a cheerleader. Every weekend I was on the sidelines, cheering for the boys, but game after game, I became more and more passionate about football, until I decided to hang up my pompons to become a football player. I did not want to stay on the sidelines anymore, because my place was on the field.

I gathered some of my teammates and a few other girls, and together with the daughter of the men’s team coach, Valeria Vismara, we went to the President of the team to ask him to create a women’s section. He laughed at us. “You are the weaker sex for a reason, you’re going to hurt yourself,” he said.

But we didn’t listen.

Since he did not want us on the football field, we decided to use Parco Sempione, a public park in the heart of Milan, as a stadium and, trained by Maurizio Vincemalis, we started to become a team. Using the Sempione Park as our training filed, we attracted a few other girls: 7 became 20. At the same time, a women’s team had been created in Bologna. We organized a match and returned home with our first win. That was when the President decided to invest in us – today, in Italy, there are 15 teams, a national league and a national team.

When did you realize that this would be your future, and what challenges did you face to achieve your goals?

I never specifically thought, “This will be my future”, I simply felt that I was doing the right thing. My parents did not approve of my choice to practice a “violent” sport, many did not believe in what I was doing, but in my heart, I knew I was on the right path. 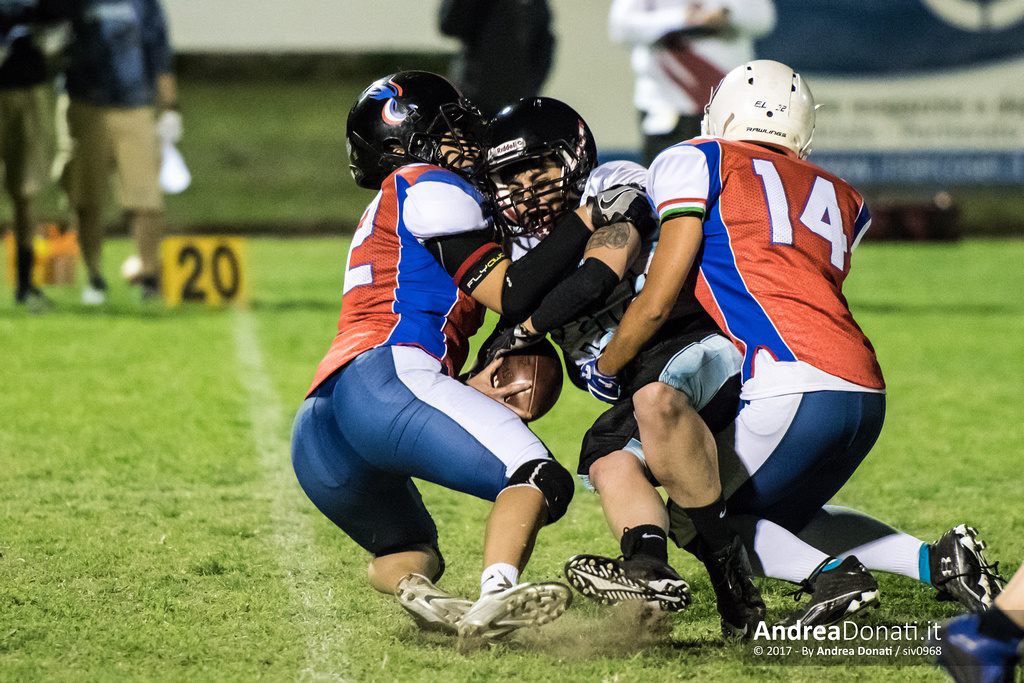 Because football makes me feel alive, it makes me feel like I am in the right place and I think that each of us should pursue the things that make our hearts beat a little faster, that make us work hard and that give us strength.

I started thinking about my future during my last year of University, where I studied Languages, Communication and Media. In my family, we have a tradition: after graduating, we must spend at least two months in the United States working in our father’s best friend’s company, which produces engine components and machines. Every morning the alarm clock rang at 4, at 5 o’clock I had to be on the assembly line to unload boxes, check the production of bolts and valves…all things that didn’t interest me at all, but that made me understand what I wanted to do in life.

I understood it the day when the sales manager asked me to help him present a product to Chrysler: instead of creating a PowerPoint presentation, I decided to produce a video. From that moment on, I realized that I wanted to tell stories.

After two Storytelling and TV Production summer programs at Menlo College in Palo Alto and at Boston University, through my Alma Mater, the Catholic University of Milan, I was selected to participate in the Sky Summer School, where I developed a sports program hosted by Sky Sport NBA presenter, Alessandro Mamoli.

After the Summer School, I worked for Sky as an intern: I told stories about Basketball and Football, but I wanted to do more. I wanted to tell stories about my sport, American football. Then, I found out that NFL Films was looking for interns and I immediately sent my application.

After seven Skype interviews they asked me to tell a story, about a page long, just to see if I could write well. I told the story of Penelope, a cheerleader who decides she wants to play football, creates the first team in Italy and then becomes captain of the Italian national team: the story ended with a question, “Did I mention that my middle name is Penelope?”

After a week, they told me I had gotten the job. I was on top of the world.

What are the most important values ​​and the most significant lessons that this sport has taught you?

Football is based on a simple concept: the fact that you have to stand up, when everyone is trying to throw you down. And even when they succeed, you have to get up and move on. This is the concept on which I try to base my entire life. Until you bury me, I do not give up, and if you can make me fall, I will rise thinking of the next move to reach my goal. 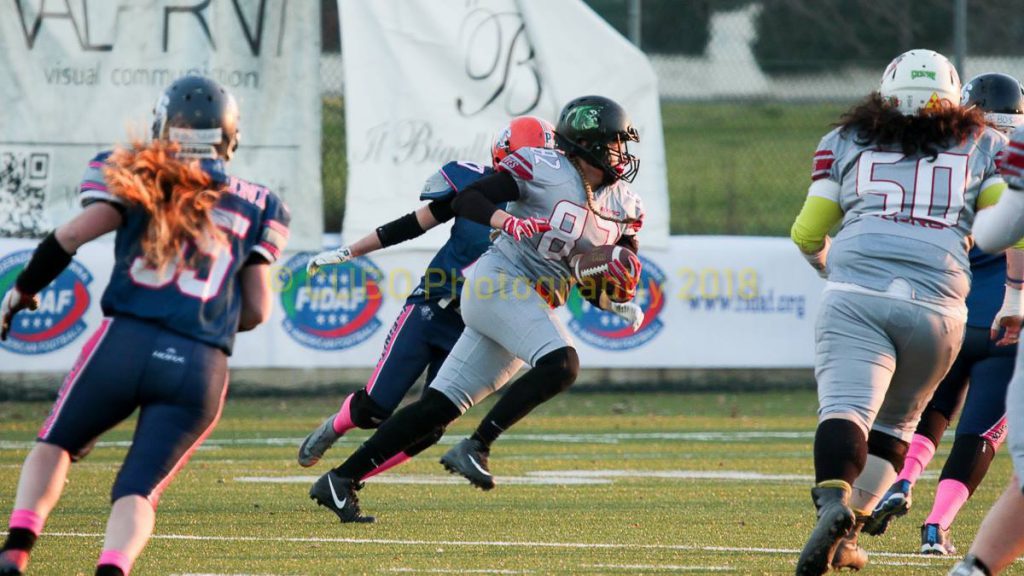 Football taught me resilience. It taught me to be a leader, but first of all to be a follower. We must first respect the coaches and those who are more knowledgeable before we can become good leaders. I realized how much I am worth on the football field. I realized that nothing is impossible if you work hard and if you know the reason why you are doing something. If you don’t have a very strong motivation, or a passion that drives you, you will never be able to do anything. I learned to work with any group and category of people with dedication and sacrifice.

What are the most important results you have achieved and that make you most proud, both in terms of your career and in your sport?

If we talk football, I’d have to say winning the national championship in 2014 and being MVP defense in 2013, as well as being named captain of the National team recently, which is a great honor for me. In terms of my career, surely the 2 Emmys Sports nominations in 2019 for my two documentaries “Cooking with Giorgio Tavecchio” and “Football in Italy”. Working for the NFL is a dream come true for me, so nominations aside I am really proud to have succeeded in making it happen.

What would you change about the sporting environment in Italy? And in the States?

Sport teaches you to live and I firmly believe that Italy should invest in the great life school that is a sport in all of its expressions, even outside of football. One of the best ways to do this is to take advantage of the entertainment industry and social media to create quality content that touches the viewers. In the States, sports are a show first and foremost: the show sells tickets and gets the economy going.

We should invest in the same kind of 360-degree fan experience and give confidence to young people. The States are light years ahead of us in terms of sports and sports entertainment, they give you an opportunity and if you take advantage of it, you can grow quickly. We can only learn from them in this regard. 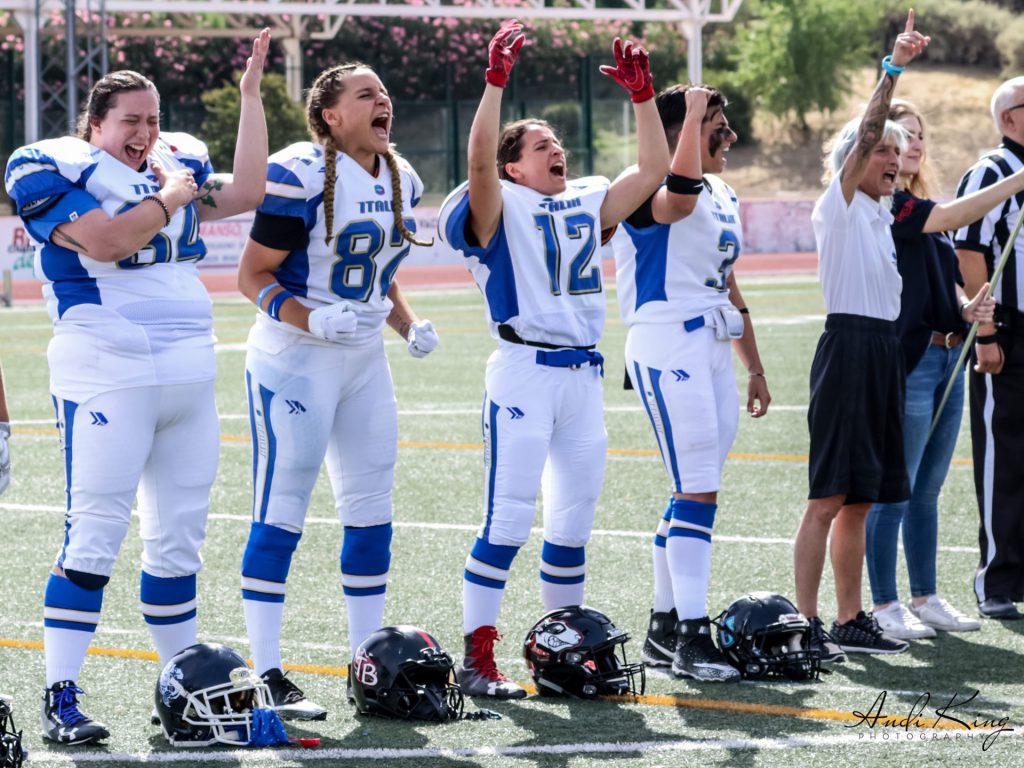 What prompted you to want to pursue a media career, and to dedicate yourself to talking about sports?

Football has changed my life for the better in so many ways. I decided to tell stories about sports and football in particular, to allow the fans to share in what players feel on the pitch. There are people who will never have the opportunity to practice this wonderful sport: I want to make them understand what it feels like to step on the field, sharing the emotions, adrenaline and strength of the players. Moreover, with NFL Films, I like to explore the footballers’ lives outside the field: their passions, what they eat, what moves them, and what sort of heritage they want to leave behind.

Because in the end that is the key, finding a communality between these super sportsmen and their fans. After all we all fear, we all love, we eat, we cry…and we all want to leave an impression on the world, something that will last forever.

What does excellence mean to you?

At NFL Films, we have a rule: NO WHINING AND DON’T FORGET TO F.L.A.P.

FLAP stands for Finish Like A Pro: for us it means that even with 40 degrees above or below zero, a thousand hours of work or many other difficulties, you must always take care of every detail and everything must be performed to perfection, until the end.

For me, that is what excellence is. Working hard, taking care of every detail, completing each goal without complaining. Fighting with all your strength until you reach your goal, or as we say in football, TOUCHDOWN.

Gaia Barlassina
Translating both for passion and for a living. i love languages, artistic gymnastics and travel. writing is my way of sharing what excellence means, by telling the stories of extraordinary people.

This year marks the 500th anniversary of the death of Raphael Sanzio, an artist who began his career in Le Marche, in particular in his home town of Urbino
Read more
Load more

The Future of Luxury and the Culture of Risk Prevention

The future of luxury and the culture of risk prevention: a revolution in the making. Interview to two key pioneers of Cindynics, the science...
Read more
Portraits

Marina Di Guardo has been into writing since she was a child. A hidden talent, a smoldering fire that flamed up in adulthood, when she found the words to write her first novel in 2010. Marina, a talent revealed in several diverse works, a maturity in style that clearly emerges from her novels, and that now seems to have found its true nature.
Read more
Portraits

Fragrances are adventurous travels, and summer brings along olfactory memories that recall the feeling of carefree days, the scents of the sea, shady woods and starry skies
Read more