The interest in art and collectibles as part of a holistic wealth management strategy continues. Technology, changes in regulations, and social impact investing are key trends to shape the art and finance market in 2019 and moving forward.

The trend of including art and collectibles in wealth management portfolios and wealth reports is as strong as ever according to the sixth edition of the Deloitte and ArtTactic Art & Finance Report 2019. 81 percent of collectors are expecting such holistic service offering from their wealth managers, an increase from 66 percent as seen in 2017.

Ultra-High-Net-Worth Individuals’ wealth associated with art and collectibles was worth an estimated US$1.742 trillion in 2018 and is expected to grow further according to the Deloitte report. This year’s survey results show particularly high agreement among wealth managers, art professionals, and art collectors that art is an important component of a wealth management service offering (see Figure 1). This opinion marks the strongest consensus on this point since the launch of the survey in 2011. 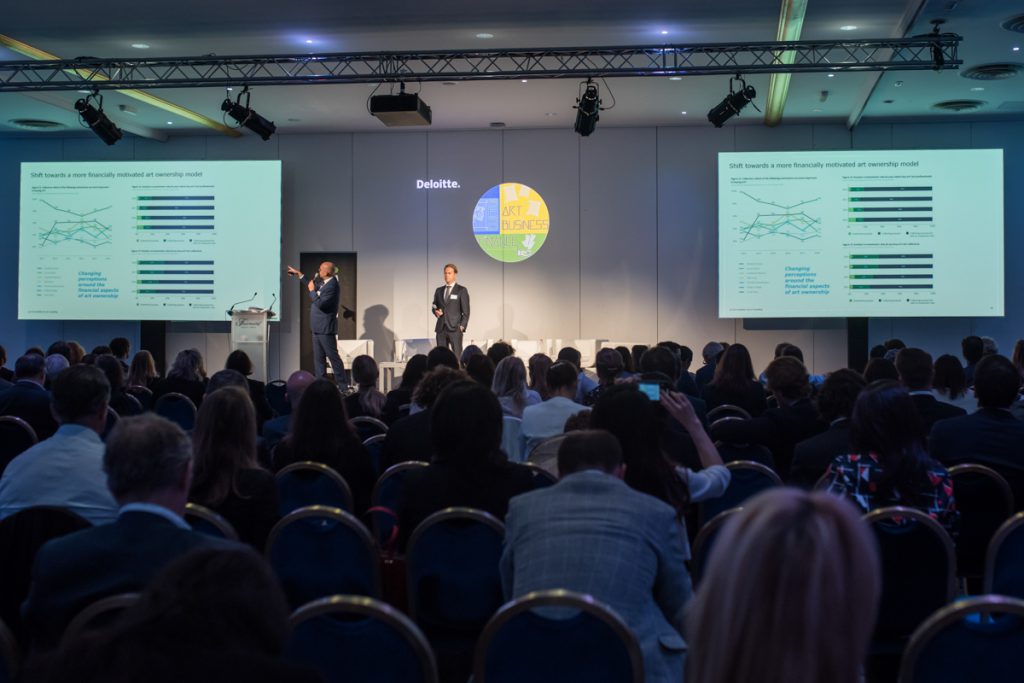 However, despite the increase in the High-Net-Worth-population and a boosted interest in art as an asset, growth trends in the art market have been anaemic when compared to the growth in global wealth.

The findings reveal that lack of transparency is an ongoing concern for collectors, causing continued distrust in the market. In addition, a newer challenge derives from next-generation investors whose interests extend beyond financial returns to social impact

This year, we identified three trends that directly or indirectly look to address these concerns: technology, regulatory changes, and social impact investment models

Technology as an accelerator for art and finance services

One promising model to better combine tech investments with efficient long-term strategies is a development of an angel-investor network for ArtTech startups:

This angel-investor network would rely on art professionals and collectors who know the market, its functioning and particularities. Such a network could be integral in directing money into those projects that address concrete issues within the art world, and align long-term expectations from investors, when providing better understanding of how the art market works

In this year’s survey, 75 percent of collectors said that lack of transparency was one of the biggest threats to the reputation of the market (see Figure 2). This is an increase from 62 percent in the 2017 survey, and marks the strongest consensus on this point since this question was introduced in 2016 with 75 percent of art professionals and 77 percent of wealth managers stating the same.

For 85 percent of the private banks, money laundering is a key threat to the market’s reputation.Governmental regulatory changes may be the antidote to this condition, despite a lack of consensus among market stakeholders about the value of government regulation over self-regulation. The advent of the EU’s 5th Anti-Money Laundering Directive, coming into force in January 2020, may become a catalyst to fight this issue and inspire more regulations to come. The report suggests that collaboration between art and finance stakeholders is essential in order to develop common guidelines and standards to address the deterioration of trust in the art market.

For 65 percent of the collectors surveyed, art and philanthropy are among the most relevant services wealth managers can offer. Wealth managers seem to have responded to that trend with more than half stating they will focus on this area in the coming 12 months, up from 40 percent in 2017.

New social investment models are required that focus on non-commercial art and cultural projects and institutions. One innovative investment or financing solution could be private-public partnerships. Such partnerships promise to turn public collections into assets with tangible returns so that public institutions have enough funding to fulfil their goals

Despite a heavily increased focus on social investments and its subsequent growth in the past two years, real estate planning is the most relevant service for 76 percent of collectors (up from 69 percent in 2017). This is closely followed by art valuation services at 73 percent. This indicates that, in line with generational wealth transfer, estate planning and art valuation are two of the collectors’ top priorities. The majority of art professionals acknowledged this demand, with 78 percent and 87 percent of the professionals believing that these two are the most relevant services for their clients.

The market for art-secured lending has grown over the last ten years, with a market size in 2019 estimated to stand at between US$21 billion and US$24 billion in outstanding loans against art. Art-secured lending ranks among the most popular art and wealth management services in 2019: 60 percent of the collectors surveyed reported it would be one of the most relevant art-related services, up from 45 percent in 2017. At the same time, only 16 percent of the European banks surveyed said they will focus on art-secured lending over the next 12 months. This figure stands in stark contrast with the 80 percent of US private banks saying this would be a focal point for them.

One reason for this difference seems to be the lack of a legal framework in Europe.The notion of art as an asset class is less widely understood in Europe than it is in the US. Moreover, there is no uniform system of registration of charges over chattels as in the US with the Uniform Commercial Code (UCC). While each European country has its own system, many of these systems are not suited to the art-secured lending market as it exists in the 21st century

analyses Picinati di Torcello. According to the Deloitte report, the US therefore dominates the global art-secured lending market with an estimated 90 percent share.

The sixth edition of the Art & Finance Report was launched at the annual Deloitte Art & Finance Conference in Monte Carlo, Monaco, under the presence of the Monegasque Minister of Finance and Economy, Jean Castellini, and other renowned speakers of the sector.

The full report can be downloaded from the Deloitte Luxembourg website at: www.deloitte.com/lu/art-finance-report.

Life Beyond Plastic, the competition for ideas on the theme of environmental sustainability was won by the artist Matteo Vettorello with an interactive sculpture, operated by two voices, in harmony in a square in Milan: an invitation to ecological action
Read more
Design

PTANG Studio, The Masters in the Art of Interior Design. Their work can be admired all over the world – Hong Kong, China, Japan, UK – and their philosophy is to create spaces that bring clients the most comfortable atmosphere that includes all of their individual preferences
Read more
Load more

Gulla Jonsdottir is an Architect Designer known for creating unexpected and marvellous, modern designs from her studio in Los Angeles
Read more
Design

PTANG Studio, The Masters in the Art of Interior Design. Their work can be admired all over the world – Hong Kong, China, Japan, UK – and their philosophy is to create spaces that bring clients the most comfortable atmosphere that includes all of their individual preferences
Read more
Dolce Vita

Palazzo Brancaccio is the new headquarters of Rome Fashion Week, promoted by Altaroma, scheduled from 15 to 17 September 2020
Read more